I have had nothing but bad fortune seeking and photographing Merlins — until this winter.  My luck has changed recently and I have had several productive encounters with these small falcons.  I’m not doing anything differently; I drive the same roads and scan the same tree lines as I have in previous years.  It’s just that the results have been better.

Last week I had an encounter with a female Merlin who was strikingly cooperative.  I’ve found Merlins to be a bit less jumpy than some other raptor species but still, they seldom hang around for very long when I stop to make pictures of them.  This bird, however, lingered and even watched me with curiosity at times.  She sat on her perch for a good two or three minutes as I observed and photographed her and was still sitting there when I drove away. 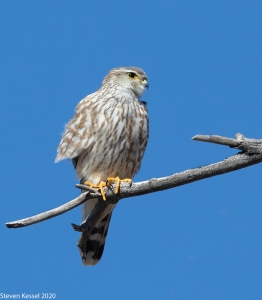 There are three color variations or “races” of Merlins: the pale Prairie Merlin, the darker and more boldly marked Taiga Merlin, and the very dark Pacific Merlin.  The Prairie Merlin summers and breeds on our northern plains.  The Taiga Merlin lives further to the north.  The Pacific Merlin inhabits the coastal regions of the Pacific Northwest.  Only the Taiga and Prairie races winter in our area and neither breed here.

This bird is clearly a female of the Prairie Race. That’s evident from her pale overall appearance and the relatively light markings on her breast and abdomen.

Merlins make their living by preying mostly on smaller birds.  They are pursuit hunters, but they also exploit the element of surprise.  Their preferred hunting technique is to perch, concealed, in trees or shrubbery that is adjacent to or amid open fields.  The Merlin launches in pursuit when an unwary bird flies within range.  It uses its capacity for high-speed flight to chase its prey down.  It strikes and seizes the prey with its talons.  If the prey isn’t killed outright, the Merlin will dispatch it with a bite to the victim’s cervical spine.  To facilitate that, the Merlin has a sharp projection on either side of of its upper beak, known as the “tomial tooth.”  It’s not really a tooth but it functions as one.

Generally, Merlins do not perch out in the open as this one is doing.  It’s likely that every sparrow and lark within a few hundred yards (meters) of this Merlin saw her and vacated the premises.  Perching like this isn’t hunting behavior.  I can only speculate as to why she was so exposed and so reluctant to leave her perch.  My guess is that she was advertising her presence to a perceived rival for her territory and, in effect, telling the rival that she, the Merlin, “owned” it.  And, in fact, there was another raptor sitting just meters away — the Ferruginous Hawk whose image I featured yesterday.  I have no doubt that the Ferruginous Hawk was utterly indifferent to the Merlin. Aside from being many times larger than the Merlin, it has a totally different lifestyle and the Merlin is no competitor.  But, things may have looked very different from the Merlin’s perspective.  These little falcons are feisty.  Like their cousins, American Kestrels, Merlins view any perceived interlopers, even innocent ones, as offensive.  You’ll notice that in my first image, the Merlin is staring straight ahead of her.  She maintained that posture for most of the two or three minutes that I observed her. She was looking directly at the Ferruginous Hawk.

One last point about this bird.  Look at her feet.  They are huge in comparison to her overall size, quite different from the relatively dainty feet of the Ferruginous Hawk that I posted about yesterday.  Remember that the Ferruginous Hawk needs small feet to reach into tight places.  By contrast, the Merlin needs very big feet to increase its chances of snatching a fleeing bird from the sky.