First-year Red Tails are very easy to distinguish from adult birds.  They lack the adults’ red tails.  Young Red Tails born in this part of the country typically have very pale breasts and have a pattern of bold dark spots on their lower breasts and abdomens.  They have pale eyes.

The birds depicted here are no more than a couple of months out of the nest, but they already are on their own.  Childhood for a Red-tailed Hawk is a very short period.  By late summer these birds must fend for themselves.  They either learn how to hunt or they starve. 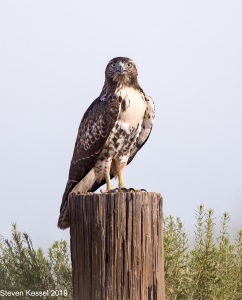 For me, photographing juvenile Red-tailed Hawks is often a very different experience than photographing the adult birds.  The youngsters tend to be quite naive.  They frequently permit the photographer to approach much more closely than any adult bird would allow.  The second bird, for example, was sitting on a low fence post when my friend Ned Harris and I encountered it.  I stopped my vehicle about 25 feet from the bird and we photographed it for a couple of minutes before it decided to leave.  In the image the young hawk stares back at us as intently as we stare at it.

It was as if the youngster didn’t know what to make of the strange vehicle and the two photographers poking their lenses out of the window. For some of these young hawks being photographed may mark their first encounter with humans.

I’m very pleased with both of these images, but for different reasons.  I made the first photo on a very bright yet slightly overcast morning.  The very contrasty sky and the bright lighting created an almost monochromatic effect that is impossible to create when the sky is cloudless. It’s an interesting and unusual effect. The second image depicts the hawk from a low angle, something that I’m not able to capture very often.  The bird’s head was at just about the same height as the window of my vehicle.  The low angle of the photo shows the bird in its true proportions.  Also, the intensity of the hawk’s stare is, in my opinion, enhanced by the fact that the bird is looking directly at us rather than down at us.