I was drinking my morning cup of decaf yesterday at 5:30 a.m. when I received a text from my friend Dan.  He advised me that he had come across a mother Great Horned Owl and her owlet living in a palm tree in the vicinity of a local hospital.  I grabbed my camera, jumped into my car, and was there within about 10 minutes.

When I arrived I found the mother owl and her youngster peacefully asleep. 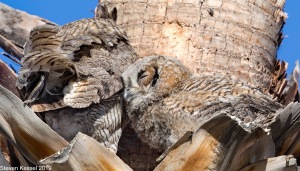 The two owls seemed oblivious to their surroundings.  I stood beneath them, in a parking lot, and observed the owls for about 10 minutes as they slept undisturbed by my presence or by passing vehicles. 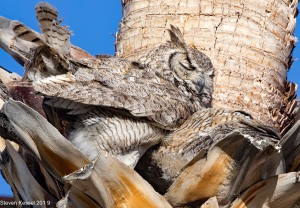 Then, suddenly, I heard a familiar noise coming from above and behind where I stood.  A moment later, an obviously angry and loudly vocalizing Cooper’s Hawk swooped down on the sleeping pair and made as if to attack them.  The mother owl’s reaction was almost instantaneous.  She transitioned from sleep to alert defensiveness in a fraction of a second, turning to confront the hawk and at the same time, shielding her offspring. 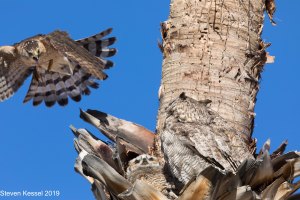 The hawk circled the palm once more and, as it did, the mother owl turned to confront it.

She is a formidable adversary for a Cooper’s Hawk, weighing about three times as much as the hawk and equipped with a razor sharp beak and extraordinarily powerful talons.  A Great Horned Owl, with its nearly one-inch (about 3 cm) talons has a grip strength that is about five times as much as that of a strong human. You’ll notice that the mother owl, as depicted above, appears to be blind in her right eye, undoubtedly the consequence of an old injury.  That doesn’t appear to handicap her.

The mother owl continued to confront the hawk as it circled the tree, shielding her owlet with her body.

After a few more seconds the hawk flew off and the owl and her offspring calmly resumed sleeping.

I spoke with a couple of passersby and they told me that the Cooper’s Hawk roosts in the immediate vicinity of the owl.  According to them, these forays by the hawk occur several times a day, invariably with the same results.  The owlet is in no real danger from the Cooper’s Hawk so long as the mother is roosting with it.  On the other hand, if the Cooper’s Hawk is breeding, it and its nestlings are potential prey for a Great Horned Owl.  Great Horned Owls have been known to swoop down on unwary nesting birds at dusk or dawn.  So, when the sun goes down the tables may very well turn for these birds.