Thanks to my friend Dan, I’ve been able to spend many evenings this spring and in the past two springs sitting in his back yard, observing the family of Western Screech Owls that resides there.  I’ve had the opportunity to make hundreds of images of these little owls and their offspring, and to study their behavior.

It’s been a fascinating but also humbling experience.  I think that I’ve learned a lot about the owls, but also I know that what I’ve learned is how much I still don’t understand.  Every time Dan and I think that we’ve figured out how these owls live one or both of them does something that unexpectedly breaks the pattern that we observed previously.

Two evenings ago was a case in point.  When I arrived at Dan’s yard, a half-hour or so before sunset, the female was already out of the nest box and was perched in a mesquite tree nearby.  She was sleeping or at least drowsing and she paid no attention to us even though we stood about 15 feet (about 4.5 meters) away and conversed in normal tones.  At about 7:30, as the last rays of sunlight disappeared, she awoke, shook out her plumage, and began softly calling to her mate.  The male, meanwhile was not perched on his customary perch and was somewhere beyond our view.

After a couple of minutes of soft calling the female took flight, alighting in another mesquite tree in the neighbors’ yard.  Dan and I followed her and I made some images as she perched in the tree.

The female Screech Owl is completely inured to Dan’s and my presence.  She typically ignores us even when we stand quite closely to her, and even when we use flash to photograph her.  She’s seen us dozens of times over the last three years and I think that familiarity breeds contempt or at least indifference.

So we were surprised, when suddenly, she stood vertically and began emitting a harsh, barking cry that was quite different from the normal soft two-note contact call that she uses to communicate with her mate.  This call was loud and urgent, and she repeated it at about two-second intervals. She was plainly extremely upset about something. 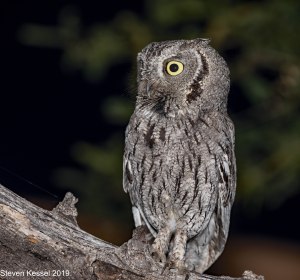 Moments after I took this picture the female flew back to her nest box tree and continued barking.  If anything, she was more agitated than previously.  We followed her on foot and as we approached her from behind, we looked in the direction that she was facing.  About 20 feet (about 6 meters) away, we saw a bobcat disappearing into the bushes.  The female was reacting to the cat, perceiving it as a direct threat to her offspring, and responding aggressively to its presence.  It was behavior that neither Dan nor I had ever observed.

She remained agitated for quite a while, even though the bobcat had disappeared.  She flew from the vicinity of the nest box to an antenna on the roof of the neighbors’ house and continued her sharp barking call.  After about 15-20 minutes of continuous barking, she changed her call, using the repeated accelerating trill that the male normally uses as a contact call.  Within seconds, another owl, well off in the distance, responded with the identical call.

That had a definite calming effect on the female.  She quieted down and flew back to the mesquite tree that she’d occupied originally. There, she resumed making her normal contact call, although a bit louder than normal and a considerably more sustained.  Shortly after she began calling, the male flew in with prey in his talons — a mouse — but he thought better of it and flew off.  Dan and I continued to observe for another 15-20 minutes, during which time the male did not reappear and the female kept up her calling.  She was still calling regularly when I left Dan’s yard.

The presence of the bobcat upset both the male and female’s routines.  The female, who often stays near her offspring in the nest box, went from an observer to an active and highly motivated protector.  The male, out hunting, refrained from approaching the nest while his mate was agitated.

Would the female have attacked the bobcat had it attempted to raid her nest?  I think so.  Her level of agitation suggested that she was prepared to give her utmost to defend her brood even though the bobcat was more than 50 times her size.  She’s not defenseless in a situation like that, being equipped with needle-like talons.  Why didn’t the male deliver prey when he showed up with the mouse?  That’s a more difficult question to answer but I think the possibility exists that the female warned him to stay away from the box lest he give away the nest’s location to the possibly lurking bobcat.

One last observation. The vision and hearing that these owls possess is truly phenomenal.  Dan and I couldn’t see the bobcat in the murky dusk until the owl literally pointed at it.  She clearly heard or saw it and from a distance of at least 20 yards (meters) in near full darkness.

I have one more post about these Screech Owls, and then it will be on to other subjects.