Swainson’s Hawk — A Study In Beauty And Gracefulness

You may enlarge any image in this blog by clicking on it.  Click again for a full screen image.

I’ve posted a number of images of Swainson’s Hawks recently.  Their spring migration has been in full swing and I have had  dozens of encounters with these buteos as they passed through our area.  I’ve collected enough images of these wonderful birds to keep posting them for a week or two.

I’m not going to do that.  This is not a blog about raptors and I have no intention of over-saturating it with pictures of one species.

But, I will post one last image, because I consider it my best photograph of a Swainson’s Hawk this season.

I found this bird roosting on top of a pecan tree.  As I photographed it the hawk looked back at me and for a few seconds we observed each other.  I love the bird’s body language and expression.  To me the image captures the bird’s fierceness but also its gracefulness and beauty.

There is no such thing as  a “typical” Swaison’s Hawk.  No two of these birds are identical in appearance.  However, all Swainson’s Hawks have common features.  The relatively small head in relation to the bird’s body is typical as is the bright yellow skin at the base of the bird’s relatively small beak and on its legs.  So also is the “bib” of contrasting feathers on the hawk’s chest.  Just about all Swainson’s Hawks have that “bib” although it varies considerably in color from bird to bird.

Nearly all of the Swainson’s Hawks migrating through our community don’t stick around for the summer.  A few do, however, and there is a small breeding population in southern Arizona.  It’s likely that the next time I feature images of one of these hawks will be later in the summer when this season’s offspring fledge. 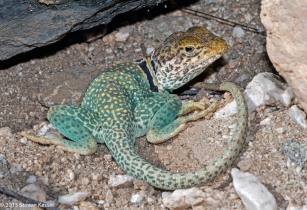 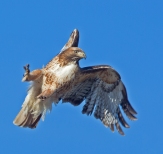 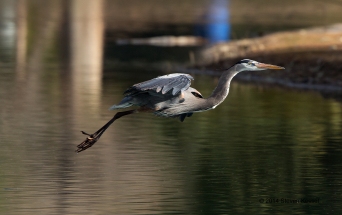 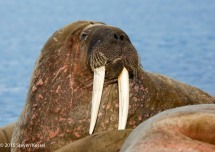 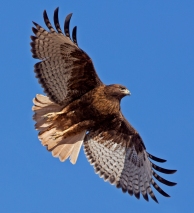