You may enlarge any image in this blog by clicking on it.  Click again for a full screen image.

I will be returning tomorrow to our journey along the Alaskan and British Columbia coasts, but today, I want to present big news from southeastern Arizona.  The autumn Swainson’s Hawk migration is in full swing.  With the exception of the final image I made the images in today’s blog a couple of days ago and I want to offer them while they are timely.

Swainson’s Hawks are a plains species.  A few of them summer in our area but the vast majority of these raptors summer and breed on the western plains in grasslands that cover the areas east of the Rockies and the intermountain regions.  Each fall they migrate to their winter homes on the pampas of Argentina.  During their migration they pass through southeastern Arizona in huge numbers, typically in flocks numbering hundreds or even thousands of birds.

The migration is a sight to stir the hearts of wildlife lovers.  It is a phenomenon that has few equals.  If one is lucky, one can see the skies literally filled with hawks, circling and soaring in immense “kettles.” 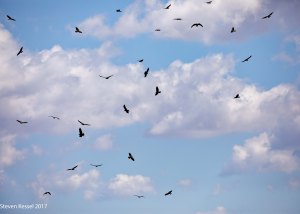 In southeastern Arizona the Swainson’s Hawks time their migration to coincide with the proliferation of grasshoppers.  Fields and grasslands in rural Arizona are often covered with huge numbers of these insects this time of year.  Migrating Swainson’s Hawks descend from the sky en masse to feast on grasshoppers.  The hawks stay for a few hours or days, gorging themselves, then they move on.

Frequently, solitary birds perch at the margins of the fields, perhaps digesting their catches before resuming the migration.  They are beautiful birds.  No two Swainson’s Hawks are colored exactly alike. 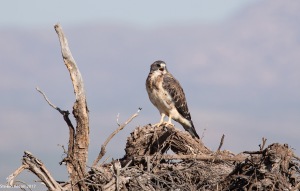 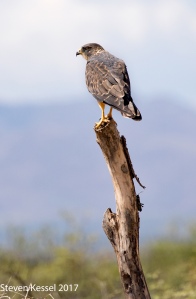 Sometimes, the birds perch in small groups.  Here, four of them are perching on a gigantic irrigation machine.  Perhaps as many as a dozen more perched on the same piece of equipment, out of my camera’s range.  The birds sat there calmly while the machine slowly rotated as it watered a field. 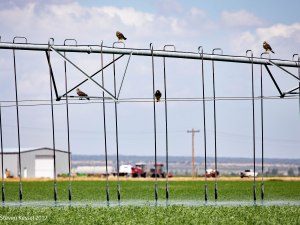 The individual shown below has captured a very large caterpillar.  It allowed me to approach quite closely as I photographed it, but spread its wings defensively. 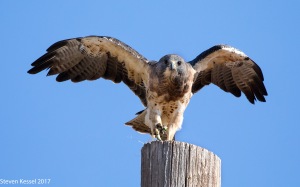 In flight, Swainson’s Hawks are among the most beautiful of raptors.  They can be identified by their very long and pointed wings, longer and narrower than those of a Red-tailed Hawk. 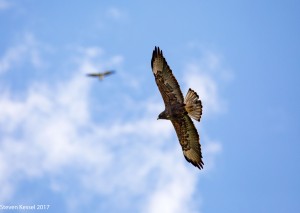 The migration will last a couple weeks more.  Then, it will end, as quickly as it began.  Waves of other species will pass through or arrive in southeastern Arizona to spend autumn and winter.  One of the great delights of living here is that we have two complete sets of avian residents.  The Swainson’s Hawk migration marks the changeover from one species group to the next. 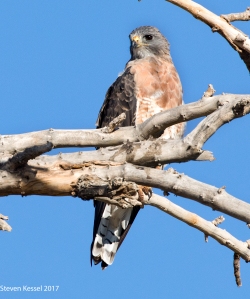 One Reply to “Swainson’s Hawks — The Great Migration”