You may enlarge any image in this blog by clicking on it. Click again for a full screen image.

Most of the country may be witnessing the turning of leaves right about now but we experience very little of that here in Tucson.  The deciduous plants in our region march to a different drummer than those in other places.  There’s no great turning of colors and leaf drop here.  Some plants drop their leaves in fall, but those generally turn brown without passing through the scarlet-orange-gold phase that one sees in northern latitudes.

But, we’re not without fall colors.  Fall in southern Arizona is peak dragonfly and butterfly season.  These extremely colorful insects are out and about in abundance during the few remaining weeks of hot weather.  I’ve spent much of my spare time photographing them since our return from The Tetons and Yellowstone and I’ll be featuring quite a few images in coming days.

Today, I want to focus on two species of butterfly that we see in Tucson this time of year, the very common Queen Butterfly and the much less common Monarch.  These two butterflies are close relatives and they look a lot alike.  It’s easy to confuse one species with the other when one sees them in isolation.  In close proximity, however, the differences are quite apparent.

Monarchs are common in other parts of the country but scarce here.  It may be that these beautiful butterflies do not do well in hot and dry weather but, whatever, seeing one is a rare treat.  Queens, on the other hand, are among our most common species.  Here’s a Queen. 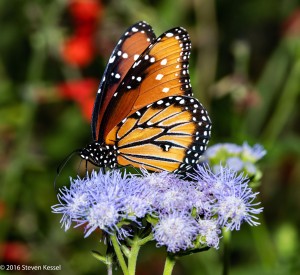 I photographed this individual a few days ago at Tohono Chul Park, a semi-private park on Tucson’s west side.  This time of year the park has numerous flowering plants and butterflies, particularly Queens, are present in large numbers.

Those of you who live in parts of the United States where Monarchs are common might assume at first glance that this first butterfly is a Monarch.  It does look a lot like a Monarch, with similar coloration, and similar patterns of black and white markings on its wings.  But, I doubt if you’d think this was a Monarch if you saw it sitting near one of the latter species. I also photographed this Monarch at Tohono Chul on the same day as I photographed the Queen, sitting on a flower just a few feet from the Queen in the first image.  I think that the differences are pretty evident.  The Monarch is larger than the Queen and its wings are somewhat longer in proportion to its body than are the Queen’s wings.  But, most noticeable is that the colors on its wings are much brighter than those of the Queen.  Overall, the Queen is a darker orange in color than is the Monarch.  The black veins in the Queen’s wings are prominently bordered with white pigment whereas the Monarch’s veins are either not bordered with white or have minimal white borders.  Finally, the Queen has a few white spots against an orange background on its wings.  The Monarch, by contrast, only has white surrounded by black.

Both species, of course, are beautiful and it is a pleasure to observe both.  But, it is especially a pleasure to see the two species intermixed, as was the case on this day.

2 Replies to “Queen And Monarch”